Project Blue Beam - Fake Alien Invasion - Be Aware of This 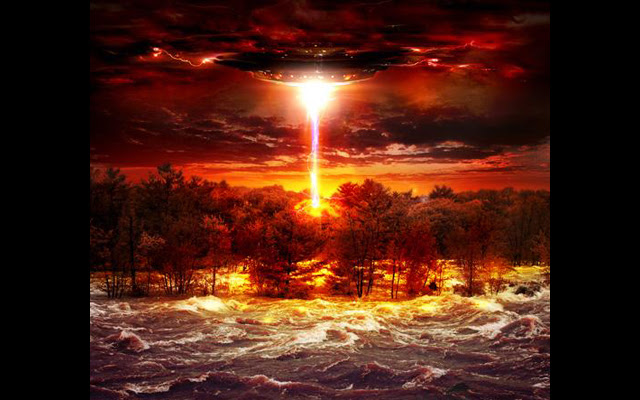 Through the years I have encountered real, friendly, loving star people who are trying to help those of us who are waking up to free ourselves of the control system currently in place on Earth. I have also encountered negative entities (that I call aliens) who kidnap and torture people. And there is another party involved with the whole alien abduction phenomenon: what I call the Secret Government. The Secret Government is a fairly small group of powerful and influential people who have created the fake history of the world and who are following and carrying out a hidden agenda largely portrayed in television and movies.

The Secret Government is most definitely involved with fake alien abductions. I have personally experienced their fake holographic aliens and I have also discovered "alien suits" made of some type of rubbery material in an underground installation I was brought to. According to abductee and researcher Melinda Leslie, the military abducts alien abductees for information retrieval. I completely agree. Please watch the Melinda Leslie Interview and read the Melinda Leslie Article about RE-ABS (Reverse Engineering of Alien Abductees carried out by military personnel).

Having been involved with the alien abduction phenomenon since I was 4 years old, I have had 40 years to record my experiences, analyze the data, and come to certain conclusions. I have been brave and always kept my eyes open and kept my awareness intact to the best of my ability during all types of alien abductions or visitations from the good star people. I have been observing and learning everything I can, all these years.

There is something that EVERYONE SHOULD KNOW: Project Blue Beam (One of the many sick and twisted tools used by the Secret Government) is very capable of projecting very life-like holographic images into our daily lives as well as when we are sleeping. MANY of the negative "alien abductions" are actually carried out by military personnel under orders of the Secret Government (MILABS).

THE SECRET GOVERNMENT IS PLANNING TO STAGE A FAKE ALIEN INVASION.
DO NOT FALL FOR IT. Have you noticed the growing number of aliens in television PROGRAMS and movies? There is a reason for this and it is not to finally release the information to the public. It is to promote their fake alien invasion that will be supported with technology such as Project Blue Beam.

Please do your research. Look up Project Blue Beam, HAARP, and Agenda 21 on the Internet and you will find the truth about the Secret Government's evil plans. Please read NASA's Project Blue Beam by Serge Monast. Here is an example of current holographic technology available to the public -- holograms that you can TOUCH -- so can you imagine what the Secret Government has that they are not disclosing???

Please, everyone, keep love in your heart and strive to know yourself. You are the only one you can truly depend on when you start to see unusual things and hear unusual thoughts in your head. Part of the HAARP technology is mind control. WE will all be able to pull through this, but we each need to know ourselves and sometimes we may even need to question our own thoughts.

oh wow. Feel rather stupid for no knowing this :)

Bonnie Jean Mitchell
My name is Bonnie Jean Mitchell. I am a life-long friend of the good, friendly star people. I help alien abductees and contactees deal with alien abduction and secret government psychic attack, including MILABS. If you need help, please contact me. I work side by side with my husband John Mitchell. Together, we host the site www.awakenvideo.org where we post the best videos about what's really going on. I try to add a bit of laughter to the alien abduction subject by drawing comics of aliens and government agents. My cartoons are featured monthly in UFO Magazine. If you are feeling like there's not enough time in the day, you've got aches and pains, you can't believe the chaos around you, you're discovering new ideas all the time, and you are waking up to your true nature, you are going through the ascension process. You are one of many who are waking up as the frequencies change and we vibrate at a faster rate. Feel the LOVE in your heart and it will pull you through anything. Work through all your past dramas that are blocking your energy body and preventing you from progressing. Just let go, be happy,and LOVE.